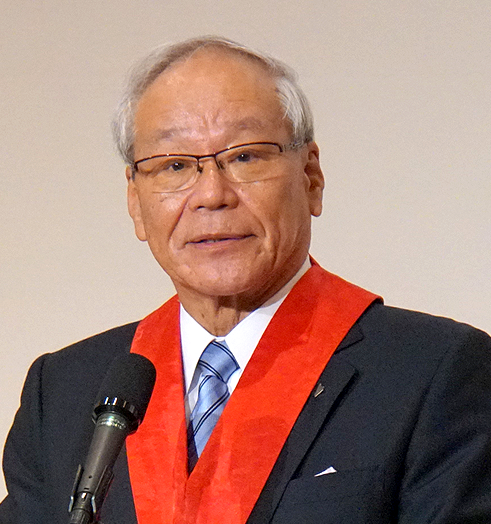 We now stand in the time of reform called an aged society. As we turn our eyes to the present and the future, we physicians must return to the basis of healthcare, and create and help maintain a society in which people enjoy long, healthy lives. This is a big challenge that all countries across the world need to work on, although the speed of the work may differ among countries.

There are many different health problems in different parts of the world. At the root of those problems, various issues unique to each county exist in all countries ranging from low-income to advanced countries, and that makes it difficult to solve problems. However, we physicians must overcome such difficulty and continue working on a wide range of challenges that exist in healthcare.

Meanwhile, in modern times of advancing globalization and rapidly progressing borderlessness, it is increasingly important that physicians across the border stand united to prepare against natural disasters and infectious disease outbreak such as Ebola, MERS, and avian influenza, and work to build a new system for a new age.

This was also made clear at the G7 Kobe Health Ministers Meeting last year where health ministers discussed health issues of a global scale, which Japan hosted as the last year’s G7 chair following the G7 Ise-Shima Summit.

At the health ministers’ meeting, the reinforcement of global health architecture against public health crisis, the promotion of life-long health with the emphasis on achieving universal health coverage and population aging, and the subject of antimicrobial resistance were the major themes, and a set of actions to follow were announced.

There are global issues we need to address urgently, such as “Climate Change” that significantly affects the environment and human health through global warming and air pollution, and “the social determinants of health” that the WHO proposed to fight against the underlying causes of ill health.

I am also aware of the importance of working toward the Sustainable Development Goals and addressing the rapidly expanding NCDs in a multidisciplinary approach at local, national, and global levels. So, we are faced with all these different challenges in global health.

I am now more convinced that the healthcare system of Japan, which succeeded in extending the healthy life expectancy to the world’s top-level, can serve as a global model that ensures a “sense of security” to an aged society that the world never experienced before. It is my hope that delivering the information of this excellent healthcare system to the world will contribute to the happiness of all the people across the world.

I will be in the position to be deeply involved in the activities of both the CMAAO and the WMA. As the JMA President, the CMAAO President, and the WMA President, I believe that my key mission is to increase the CMAAO activities even more and bring the CMAAO even closer to the WMA, so that the voice of the Asia-Oceania region will reach the WMA better. I shall strive to fulfil my mission, with the support from all of my colleagues.

Thank you very much.